Big online applications are always targets for scammers  – and Government apps, like the widely-used myGov, are no exception.

Warrnambool businesses in particular have recently been targeted with a series of scam emails, reminding us of how important it is to be aware of what a phishing message looks like.

Phishing emails are one of the most common forms of email scams – they try to trick you into typing your username and password into a fake logon screen, to capture your details and gain unauthorised access to your account.

As myGov is a central point for managing many of your government services, having someone poking around in there could be very, very, bad.

Luckily, myGov is actually quite well designed from a security standpoint.

The first thing to keep in mind is, myGov will never send you an email containing any links. Or any detail, for that matter.

All you will ever get from myGov are generic emails telling you to log into your myGov account to view something new. For example: 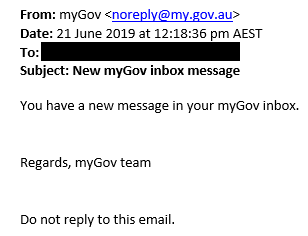 myGov know that emails can be faked, so they only send them to prompt you to independently log into your my.gov.au portal to safely access the details there.

Any email claiming to be from myGov which contains any more detail than the above is high likely to be a scam and should be immediately deleted. e.g. 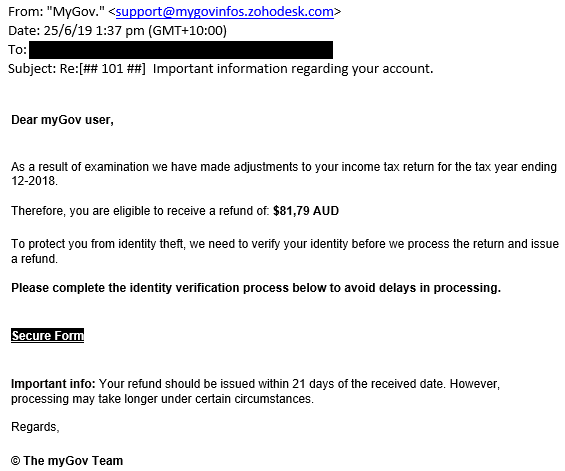 This is a fake myGov email.

If it was from a less well designed app you would need to start looking at email addresses, URLs, language tone, etc…

Thankfully, as it’s imitating a myGov email,  all you need to know to identify it as fake is that it’s telling you something other than “log into myGov for more information”.

If you’re ever unsure of the legitimacy of a myGov email, contact your Sinclair Wilson accountant for assistance. We have a team of IT experts who are well-versed in the latest scams, security breaches and developments to be aware of.